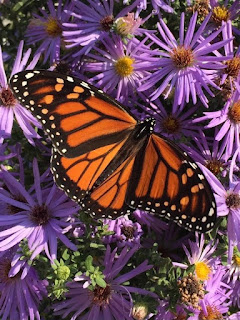 The Flowers at Lake Lure's Flowering Bridge, now 10-years-old, provide a habitat for all kinds of butterflies, insects, bees, and wildlife throughout the year. Last year they welcomed 180,000 guests.

As we often say, doesn’t time fly! Summer is nearing her end and signs of fall are beginning to appear. The autumnal equinox arrives on Thursday, September 22. Soon our trees will explode with vibrant colors of red, yellow, and orange before leaves begin to drop. Asters and chrysanthemums bloom beautifully. Orange pumpkins join the color parade. We see apple trees heavy with fruit on a drive through Edneyville. As the weather cools and sweaters are retrieved, football season is just warming up. Calendars are marked with Halloween, the end of daylight savings time, and Thanksgiving. While we store firewood for the winter season ahead, animals work to make sure they have food and shelter for the cold weather ahead. My favorite time of the year!

This update is provided by the Board of Directors of the Upper Hickory Nut Gorge Community Club:
· It is time to elect Board members for 2023. If you are interested in serving on the Nominating Committee or on the Board of Directors, let us know by sending an email to groundedingerton@gmail.com.
· We are in the early development phase of a Memorial Garden to be located on the grounds of the Community Center. If you are interested in working on this project, let a Board member know or reply to our email address.
· With incredible generosity, our community continues to support Hickory Nut Gorge Outreach. In July, over 200 pounds of school supplies were donated. Thank you!
· “Gentle” yoga classes meet every Wednesday at 2:00 pm.
· Coronavirus is still considered to be pandemic – a disease prevalent over a whole country or world. Scientists predict Covid-19 will become endemic in 2024, meaning it will likely resemble seasonal flu. The Board has agreed to continue monthly dinner meetings. CDC guidelines for current Covid-19 community levels will be provided to community members for each person to make personal decisions about participating in community events.
· After much discussion, the Board decided we will not host Gerton-Fest this fall. This decision is not based on Covid-19, but rather the economy. It is believed that merchants will not support the event with donations as they have historically done and those who attend Gerton-Fest would have less to spend.
· We are hopeful that 2023 will bring back some degree of normalcy and we can again host Chili Cook-Off, Sale-on-the Trail, summer play and Gerton-Fest.

Keep Gerton beautiful by helping at the quarterly litter sweep on Friday, September 2nd. Meet at the Community Center at 9:30 am.

Appreciation is extended to Margaret Whitt for writing, with support from Board members, our annual application for the WNC Honors Award. This award is built on a 70-year tradition of recognizing rural community development clubs for their innovative ideas and grassroots solutions. Awards will be given on November 13th.

Thank you, Stan Mobley and Mike Hamlin, for reminding us with US flags along highway 74, that we live in the best country in the world.

Lastly, a personal thank you from me to the Board members of UHNGCC – Stan Mobley, Jim Earnhardt, Ellen Boyle, Sylvia Sane, Jean Bradley, Sarah Gayle, Chuck Mallory, and Margaret Whitt. Your service makes our community a better place to live.

“It’s the first day of autumn! A time of hot chocolatey mornings, and toasty marshmallow evenings, and, best of all, leaping into leaves!” Winnie the Pooh, Pooh’s Grand Adventure 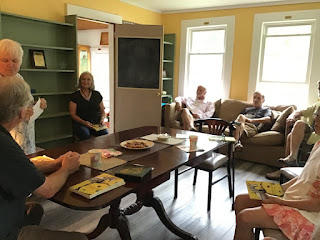 Our new Community Room turned out to be the perfect place to hold our inaugural poetry reading on June 30. We had just under a dozen people turn out for Eric Nelson's reading from his latest collection of poetry, Horse Not Zebra. Eric taught at Georgia Southern for over twenty years and then moved to Asheville, where today he teaches at the Great Smokies Writing Program at the University of North Carolina, Asheville. Eric read a number of poems and answered questions after each one and at the end of his reading. He spoke of the arrangement of the poems and how the book editors re-arranged his work. The book is available in local bookstores or online. 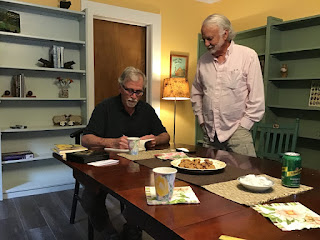 Eric Nelson signs a copy of his book for Graham Sturgis.

Community Turns Out for July 4 Cook-out and Bingo

At 6:30, about 50-60 people gathered at the center to share a traditional holiday meal --  burgers, hot dogs, and veggie burgers on July 4. Jim Earnhardt and Steve Jones did the grilling. The numbers of people who preferred the veggie burgers had increased since last year, so moving forward we will know what to do!
People brought sides and desserts--and we had plenty of watermelon to go around.
Thanks to Sylvia Sane, Ellen Boyle, Don and Marianne Adoryan, Chuck Mallory, Karen Owensby, and Sarah Gayle for preparing the condiments and lettuce/onion/tomato/cheese platters.
After dinner we played about 20 games of all kinds of BINGO. Players suggested the kinds of games we would play. Prizes were large candy bars with various amounts of money taped to the back -- top prize was $10. We also gave away a dime, a Kennedy half dollar, a number of $2 bills. Each table had at least one winner. Geneva Matteis (seen below) was the only triple winner--all together she was able to walk out with $2.50! 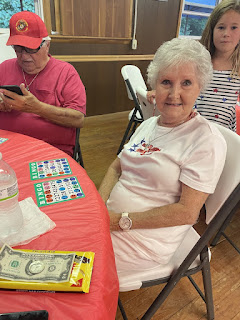 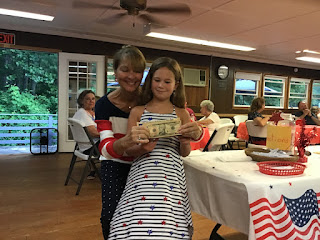 Brenda Baitinger and grand niece Nora win the top prize of $10 in Bingo. 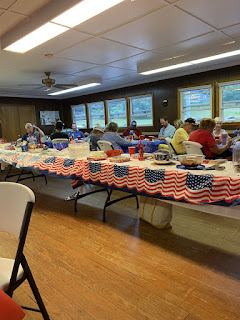 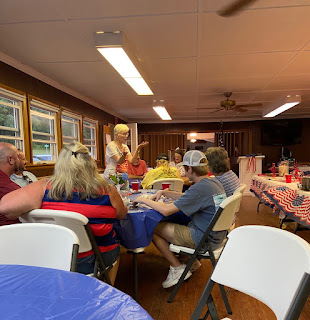 Barbara Earnhardt explains a bingo fine point to the Freeman family!
The room becomes a bit more quiet when folks settle down for serious bingo. 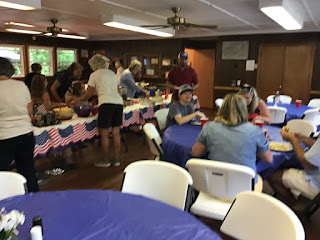 Lots of laughter and talk while people select their burger of choice and pile on the sides. 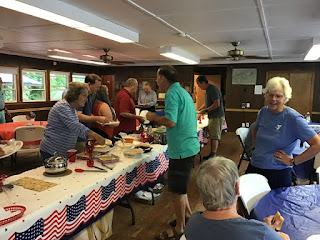 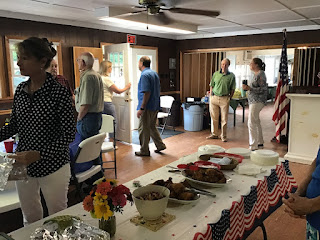 We came together for dinner on Tuesday, July 19. We had a late afternoon rain, and for some, power was out --for either an hour or a few minutes. Twenty came, and since the play has been canceled because of a rise in covid numbers, we had no program. We took the opportunity to introduce ourselves: Jim Earnhardt has been coming here since 1945--and knew, even then, that one day he might retire here. Teresa and Tommy Garrik and David and Brenda Baitinger  (make that sisters Teresa and Brenda--the husbands came later) have been coming since the 1960s. Sarah Gayle found her way from Texas in the late 1990s, as did Sylvia and Jim Sane, who came from Alabama. All others present moved here this century. Old memories were shared -- the covered wagon trip up to the top of Bearwallow Mountain, the swimming pool that now lies UNDER the commons area in Chestnut Hill. Some spoke of the coldness of the mountain water. People told the location of their Gerton home, which was accompanied by much pointing of fingers in various directions.
Thanks to Lana and Ted Roberts, who found us from Texas via Florida, and have been married now for over 60 years, for hosting, along with Jim and Kyanne Miller, who hail from Florida and still live there for most of the year. In fact, the Adoryans, the Matteises, and Margaret Whitt, also share Florida roots. Relative newcomer Lee Strickland came here from Chicago.
The food is always plentiful and good. Make plans to join us for our monthly meals -- always the third Tuesday at 6:30 p.m.--and get to know your neighbors. 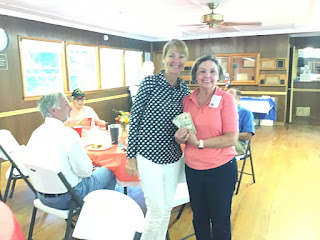 Sylvia Sane conducts the 50/50 raffle, gathering a total of $55. Brenda Baitinger wins the raffle, but once again returns the money to the club. Thanks, Brenda, for this generous gesture. (Since our re-opening, each winner has done this. It is certainly possible to keep the money!)
We took 208 pounds of school supplies, which is a heftier amount of supplies compared to its weight. Thanks to all who remember to support our neighbors through Outreach. 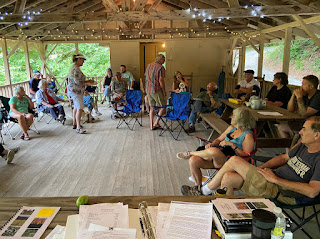 Chestnut Hills Homeowners Association hosts its annual meeting on Sunday, July 3. Sitting in the old swimming pool pavilion, we take care to know what we can about our water. 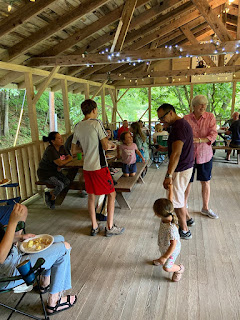 After the meeting, we returned to celebrate the 100th anniversary of our neighborhood with a pot luck meal and lots of good talk with our neighbors. 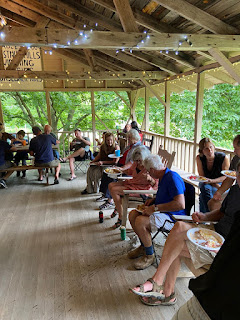 With thanks to Teresa Garrik and Brenda Baitinger for hosting the August gathering, we had appetizers on each table! This extra giving was a first in memory! We had about 25 people come together and contributed 164 pounds of breakfast items that have been delivered to the Outreach in Lake Lure. 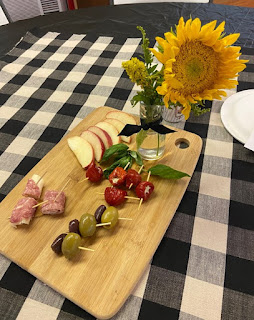 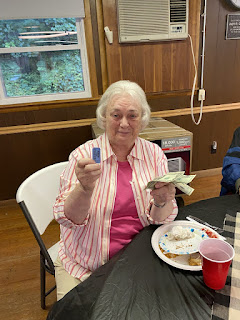 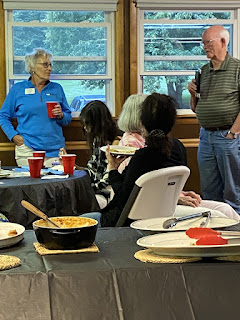 The Flowering Bridge is now ten years old. Plans are in place for the construction of a new educational center, which will be accompanied by a fund raiser of selling hand-painted bears. This will take place by auction on the website beginning in September. (The last time they held this kind of fundraiser, they raised over $9,000!) 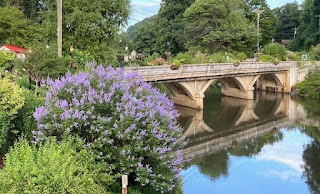 What used to be a work-in-progress has now become a mature number of gardens across a bridge that once shepherded cars from Chimney Rock into Lake Lure. A slate of free classes to the public is scheduled throughout the year. Upcoming are September 27, at 10 a.m. on Seed Saving, Storing, and Swapping. Bring seeds to swap. And on Tuesday, October 25, at 10 a.m. Amy Wald will lead a program on How to Build a Pergola for your Garden. Holiday Decoration and Lights will be up from November 15- January 2023. 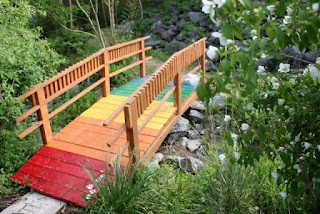 ECHO of the Gorge is published bi-monthly by the UHNGCC. News and photos may be sent to Margaret Whitt at margaret.whitt@du.edu. Photos for this issue provided by Margaret Whitt, Chuck Mallory, Sylvia Sane, Linda Reandeau.